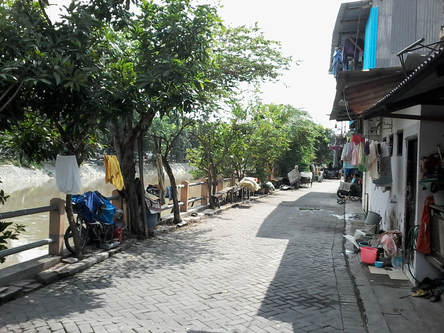 Tambak Bayan, Surabaya
If democracy reached the shores of Southeast Asia as a wave, then decentralization was the surf. It followed in democracy’s wake in both Indonesia and the Philippines, the region’s two most populous countries, and its effects, like surf’s churn, pulled in all directions. It allowed some regions to attract new economic investment and grow rapidly, while others stagnated (Pepinsky and Wihardja 2011). It empowered political “bosses” and “little kings”, but it also gave rise to reform-minded local leaders, some of whom, like Indonesia’s President Joko Widodo, went on to careers in national politics (McCoy 2009, Sidel 1999, von Luebke 2009). And it intensified some local conflicts while also arguably holding together two sprawling archipelagic nations (van Klinken 2007).

Decentralization obviously did not produce these effects in isolation. Rather, it is “an act of letting go”, producing unpredictable effects “contingent on the characteristics of society, the economy, and key political actors at the local level” (Faguet 2012: 192, italics in original). In Indonesia and the Philippines, local governments exercised similar powers—to tax, to deliver services, and to hold elections—but in different ways to different ends. Some local governments embraced their new powers; others ignored them. Many abused them. And in a few interesting cases, local governments learned over time to exercise their powers more effectively.

Local taxation, a key pillar of decentralization in both Indonesia and the Philippines, is a case in point. Variation in city revenues, comprising tax and non-tax sources but excluding transfers from the central government, ranged from 0.1 to 7.2 percent of GDP in the Philippines and from 0.2 to 5.3 percent of GDP in Indonesia. This within-country variation far exceeded differences between the two countries, which were similar in the aggregate. Variation in revenues was driven not only by economic differences, but also by specific actions taken by local governments to adopt new tax ordinances (or not), to revise tax assessments (or not), and to enforce collection (or not).

Why do cities exercise similar powers of taxation differently? And why do some cities increase their capacity to tax over time, while others do not? Cities in Indonesia and the Philippines were equipped with similar powers to enact, assess, and collect specific taxes. These new powers imposed similar personnel, technical, and accounting burdens on city governments unaccustomed to such responsibilities. And they were accompanied by similar political constraints introduced by elections for local executive and legislative offices. Yet, even after accounting for economic differences, tax revenue varied widely, both across cities and over time.

This book argues that variation in the ability of cities in Southeast Asia to tax depends on the degree of cooperation between businesses and local government. Taxation raises questions about distributional fairness and trust in government that are exacerbated by decentralization because local governments struggle to administer taxes impartially and to commit to spending policies credibly (Scheve and Stasavage 2016, Weingast 1990). The key contention of this book, therefore, is that local governments “borrow” institutional capacity from civic associations to overcome these problems. While many types of associations could in principle step unto the breach, business associations dominate the cases examined in this book. In Southeast Asia, the private sector plays an outsize role because of the fragmentation of other interests including political parties, labor unions, and special interest groups (Aspinall 2013).

Business associations facilitate taxation by enforcing distributional agreements and monitoring public spending, but not all business associations wield sufficient institutional capacity to do so. Their ability to enforce distributional agreements depends on the value of the selective incentives at their disposal, while their ability to monitor public spending depends on the extent to which they enjoy privileged access to local officials (Doner and Schneider 2000, Schneider 2004). Furthermore, businesses do not facilitate taxation simply because they have the capacity to do so. Business associations and local governments only cooperate under conditions of mutual vulnerability; that is, when businesses need public infrastructure to remain profitable, but local governments are too cash-strapped to provide it. These scope conditions mirror “systemic vulnerability” (Doner, et al 2005) in that an existential threat (against failing local businesses) combined with resource scarcity (in the form of limited revenue) motivates demand for institutional reform (in the form of new taxes).

My argument helps to explain why local elections have not played the role expected of them in Southeast Asia. They neither pressured officials to tax efficiently, as hoped for by scholars of decentralization, nor generated demand for redistribution, as theorized by scholars of political economy. The institutional capacities necessary for taxation do not simply materialize in response to electoral incentives. On the other hand, they do incubate within civic associations. The cases in this book show that even when state capacity is weak and elections pro forma, strong associations can, in Putnam’s words, “make democracy work” by providing institutions that sustain distributional consensus and underwrite credible commitments.
​
I assess this argument by comparing the role of local businesses in the formulation and implementation of tax policy in three Philippine and four Indonesian cities. These cities are all provincial capitals and economic centers, yet they vary in terms of tax revenue even after accounting for economic and fiscal differences. Across cities, I find that tax revenue co-varies with the strength of business associations, but not with the competitiveness of elections or the degree of inequality, another variable often held to motivate redistributive taxation. Within cities over time, I find that businesses, through their associations, directly influence the ability of local governments to tax. Business leaders in every case evaluated proposed taxes in terms of anticipated distributional fairness and the credibility of mayoral promises, but only those businesses represented by strong associations ultimately supported new taxes.
​firstname.g.lastname@gmail.com​